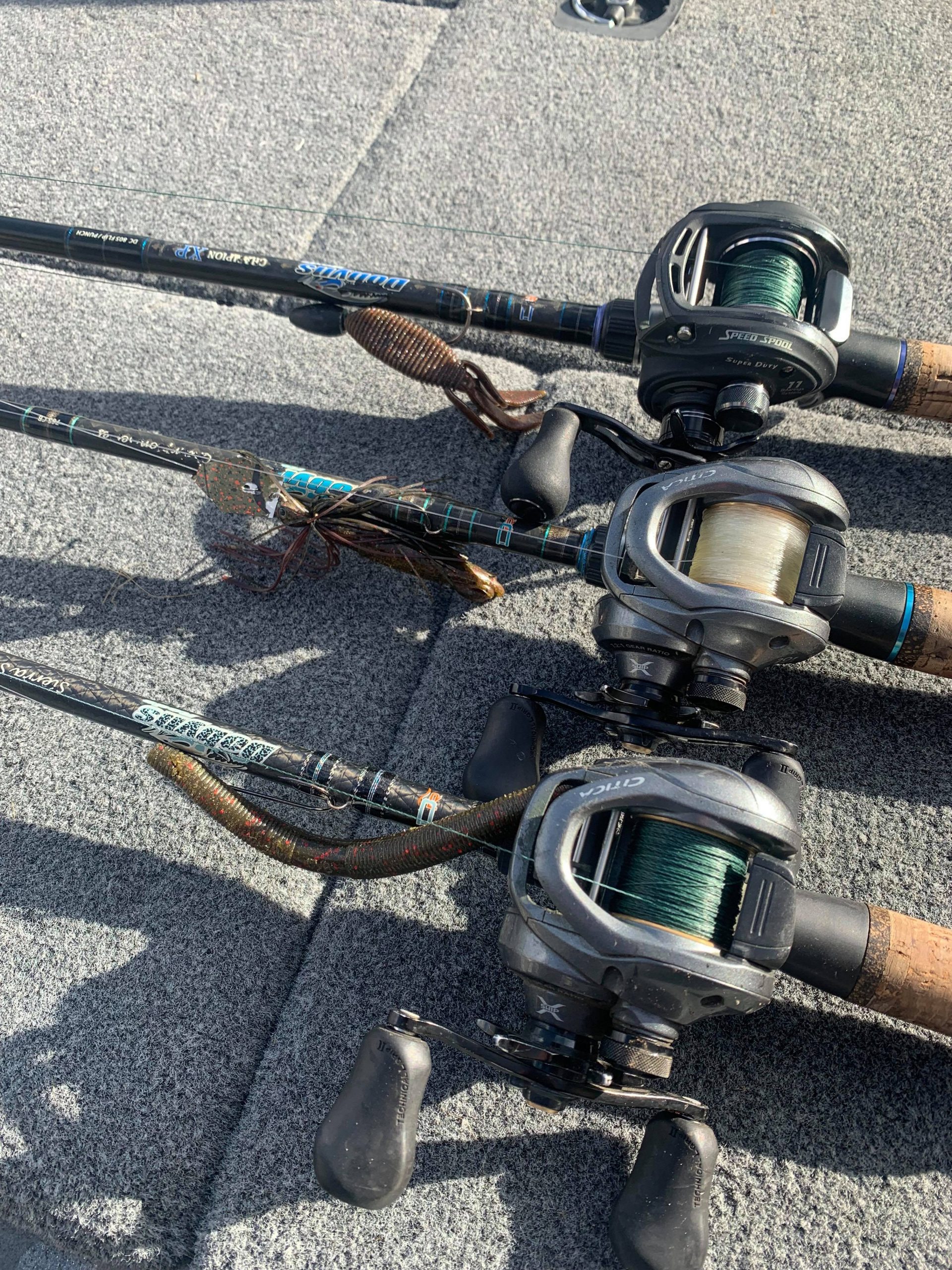 1. Austin Wilson caught fish on a trio of presentation including a 3/8-ounce green pumpkin Z-Man ChatterBait with a Missile Baits Missile Craw in green pumpkin red flake, an unweighted Yamamoto Senko Texas rigged with a 4/0 worm hook and a Berkley PowerBait Bunker Hawg on a 5/0 Owner Jungle Hook and a 1 1/2-ounce Wicked Weights tungsten weight on 65-pound P-Line braid.

Difference Maker: After catching a key 3-pounder in Frank’s Tract, Wilson moved to the Mokelumne River, where he punched mats near the takeoff site at B & W Resort. This late-day move allowed him to cull everything except that 3-pounder in the last 20 minutes.

2. After starting out with a 3/8-ounce Z-Man Chatterbait with a Yamamoto Flappin Hog trailer, Luke Johns caught most of his fish by punching mats with a Yamamoto Cowboy on a 3/0 Owner flipping hook and a 2-ounce weight. Watermelon green pumpkin red flake laminate was his best color.

Difference Maker: After several unproductive hours on Day 1, Johns identified a tule island along the San Joaquin River, west of B & W Resort. Targeting the hyacinth mats that were blown against this island delivered most of his weight.

3. Day-1 leader Ken Mah caught most of his first-round fish with a 1/2-ounce Bill Lewis Rat-L-Trap (Toledo Gold) tied to Sunline CrankFC Fluorocarbon and a 1/2-ounce custom vibrating jig with a Big Bite Baits SwimOn trailer, but he also punched a peanut butter and jelly Big Bite Baits Yo Mama on a 4/0 Gamakatsu Superline hook tied to Sunline FX2 Braided line. On a slower Day 2, punching was his best option.

Difference Maker: Mah found that downsizing his WOO Tungsten punch weight from the 1 1/4- to 1 3/4-ounce sizes he used on Day 1 to a 1-ounce earned him the tough bites.

4. Juan Acosta did his work with a Berkley Havoc Pit Boss, a Reaction Innovations Vixen (shad pattern) and a Bill Lewis SB-57 squarebill.

Difference Maker: Concentrating on grass flats in the South Delta region, Acosta selected areas known for holding abundant food sources. Finding the baitfish allowed him to stay on the fish and even find a 45-minute rally of nonstop action.

5. John Pearl, who earned the $1,000 Signature Gate Systems Big Fish of the Tournament award for his 6.69-pounder, caught that kicker on a black/blue Bass Union Arkie style jig with a black/blue Strike King Rodent. He also caught fish punching a Netbait Dagger and an unnamed beaver style bait (both tilapia magic) with a 1 or 1 1/4-ounce tungsten weight.

Difference Maker: Using a 766H Douglas Outdoors rod with a Shimano Bantam 151 and 65-pound PowerPro Max Quattro, Pearl focused on areas with current breaks and a mix of weeds.

Difference Maker: Cloutier said that time management was essential. His bladed jig worked best on bare rock walls during morning high tides. When the tide fell, he flipped grass for fish that had pulled to the outer edges.

Difference Maker: The key, he said, was capitalizing on weather transitions. The overcast and rainy conditions offered topwater opportunities, while sunny times were best for punching.

8. Zack Thompson spent the majority of his time throwing a Megabass Vision 110 in the pro blue 2 color. This produced most of his bites, but he also caught a couple of key fish on a 1/2-ounce red Bill Lewis Rat-L-Trap.

Difference Maker: Thompson took the strategy of qualifying for the top-10 via the Most Scorable Bass standings. He reported going through countless short fish (under the 14-inch APEX minimum), but ultimately finding enough of the right size.

9. On Day 1, Joe Uribe Jr. caught fish on a 5/8-ounce brown purple custom J-Money bladed jig with a Berkley Pit Boss in Bama bug and a power shot with a 6-inch Roboworm Fat in margarita mutilator on a 3/0 Roboworm Rebarb hook with a 5/16-ounce Voss dropshot weight on a 12-inch leader. The second day saw Uribe catch most of his weight by punching a Reaction Innovations 4.20 Sweet Beaver in Big Texan on a 4/0 Mustad 3X Grip Pin punch hook with a 1 1/2-ounce Voss punch weight.

Difference Maker: Uribe trusted his power shotting to a Performance Tackle Custom JRS72 XF rod, which provided the length and action he needed for precise sidearm casts, along with the backbone to pull big fish out of cover. Uribe paired this with a Daiwa Tatula SV 103 reel and 20-pound Sunline SX1 braid with a 10-pound Sunline FC Sniper fluorocarbon leader.

10. Bill O’Shinn kept it simple and caught his fish by throwing a 1/2-ounce green pumpkin Z-Man JackHammer Chatterbait with a green pumpkin Yamamoto Zako trailer and flipping a junebug Pro Point Lures Bug on a 4/0 Trokar EWG hook with 1/4-ounce tungsten weight. He fished both on 20-pound Seaguar Tatsu fluorocarbon.

Difference Maker: O’Shinn fished his ChatterBait on an iRod 763 cranking rod with a 7:1 Shimano Curado reel, while he flipped with a medium heavy iRod 703 Air and a 9:1 Abu Garcia Revo Rocket. The latter, he said, afforded him 25 percent more casts in a day.