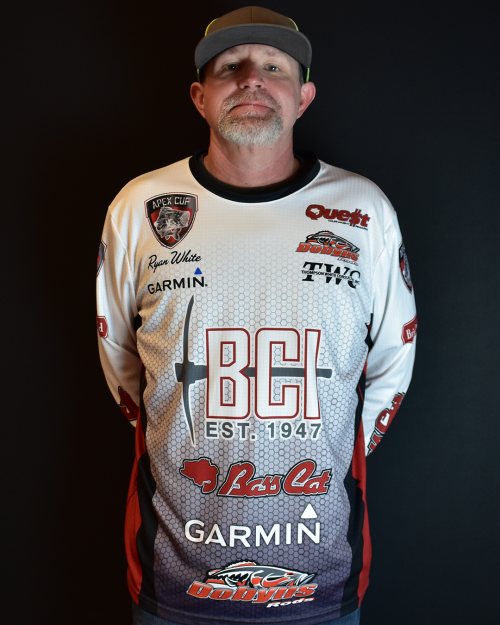 I am a hardworking guy. I will never give up. I am the first trailer in the parking lot and the last one out. I will always try new ways to catch fish and I have dedication. Win, lose or draw, I am go, go, go, and will never stop. I’m drawn to APEX because it is exclusive – not everyone was invited, not everyone qualified. You couldn’t just sign up and go and I like that it is an individual weight. You can fish by yourself. It is just you and the boat – solo – with 100 percent focus on catching the fish.

Ryan began trout fishing with his father. When dad’s boat dealership expanded into bass boats, so did dad’s fishing interest. As his dad’s fishing partner, Ryan too delved into bass angling. Ryan owned his first boat at 20 and began fishing on his own. Moving into Pro/Am’s, in 1999, Ryan found himself in a Bassmaster event and won his first boat. In 2001, he won his second and he has been chasin’ that dream ever since.

Ryan’s strengths are finesse fishing, spotted bass, and reservoirs; but he loves cranking. Currently his favorite crankbait is the SPRO RkCrawler. He never leaves home with at least 50 packs of Yamamoto Hula Grubs. He also is regularly armed with Yamamoto Senkos, a box of Roboworms, and Keitech swimbaits. His rod lockers hold at least 20 Dobyns Rods with Shimano and Daiwa reels.