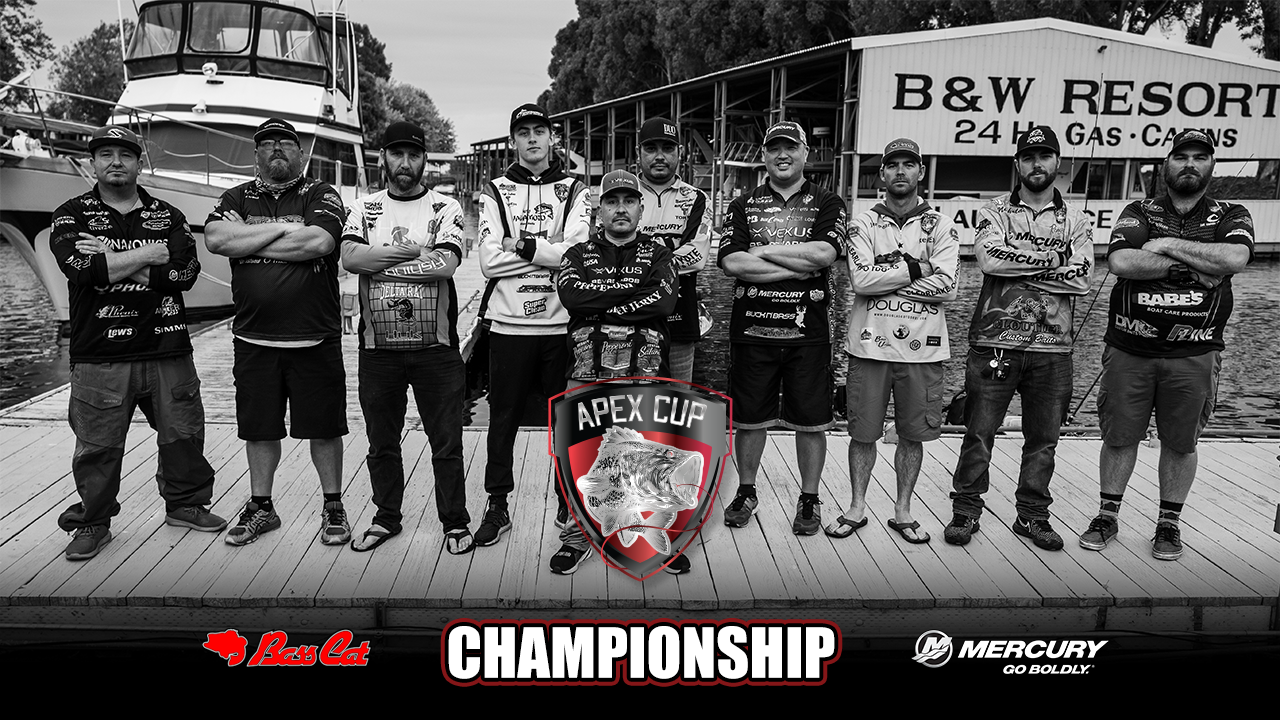 By David A. Brown
SACRAMENTO, Calif. — Putting early frustrations behind him Austin Wilson of Citrus Heights, Calif. rallied with a day-ending charge and took over the lead at the APEX Cup Pro Tour Championship on the California Delta presented by BassCat/Mercury with a two-day total of 35.08 pounds.

Starting his day with a 3/8-ounce green pumpkin ChatterBait and a Missile Baits Missile Craw in green pumpkin red flake, Wilson endured a largely unproductive morning that found him with only five small fish around noon. Realizing he needed to make a change, he relocated to Frank’s Tract where he targeted the current flowing through a break in the old levee with an unweighted Yamamoto Senko Texas rigged with a 4/0 worm hook.

“I was just daydreaming, which is what you do when you’re fishing an unweighted Senko, and the line just came tight,” Wilson said. “That 3-pounder culled out a really small one.”

A final move to the Mokelumne River, near the takeoff site at B & W Resort, saved his day, as Wilson culled out everything except that 3-pounder in the last 20 minutes. He orchestrated his late-day flurry by punching hydrilla mats in 4 feet with a Berkley PowerBait Bunker Hawg on a 5/0 Owner Jungle Hook and a 1 1/2-ounce Wicked Weights tungsten weight on 65-pound P-Line braid.

“The key for me was not getting spun out,” Wilson said. “I just kept focused, kept my head down and kept grinding it out. I had the confidence that whatever was in my hand, eventually, I was going to get bit.”

Luke Johns of Folsom, Calif. is in second place in the Total Weight standings with 34.75 pounds. Improving from third, Johns added 18.48 to the 16.27 he weighed on Day 1. The difference, he said, was a more focused effort.

“Yesterday, the first three or four hours were unproductive, but then I got dialed in on an area and that’s where I spent all of today,” Johns said. “I’m fishing along the San Joaquin River, west of B & W Resort.

“I’m fishing a tule island that sits out in the middle. There’s mats of hyacinth blown up into the tules.”

After catching some of his Day-1 fish on a 3/8-ounce Z-Man Chatterbait with a Yamamoto Flappin Hog trailer, Johns caught most of his first round bag and all of today’s by punching those mats with a Yamamoto Cowboy on a 3/0 Owner flipping hook and a 2-ounce weight.

“With the Yamamoto Cowboy, I rotated between three different colors, all were green pumpkin variants,” Johns said. “My most productive was watermelon green pumpkin red flake laminate.”

Acosta, who makes his home in Tracy, Calif., leads the Most Scorable Bass standings with 26. After placing second on Day 1 with 11, he added 15 today.

Acosta again ran south and returned to the same grassy flats he fished on Friday and stuck with the same bait lineup: A 1/2-ounce homemade vibrating jig with a Berkley Havoc Pit Boss, a Reaction Innovations Vixen (shad pattern) and a Bill Lewis SB-57 squarebill.

“I did the same thing I did yesterday, it was just better today,” Acosta said. “At one point, I was on a school of fish and for about 45 minutes, it was one every cast.”

Mah ended up catching his fish by punching a peanut butter and jelly Big Bite Baits Yo Mama on a 4/0 Gamakatsu Superline hook, but he lightened his weight from the 1 1/4- to 1 3/4-ounce sizes he used on Day 1 to a 1-ounce weight. Flipping into the sparser sections of mats, he was able to tempt lethargic fish holding on the bottom.

“This slowed me down because you can’t stand on the trolling motor when you’re flipping a 1-ounce weight,” Mah said. “I would flip into the grass and just lift softly. A lot of the bites were just pressure bites today.”

Rounding out the top-5 were Wilson with 21, Pearl with 18 and Nick Cloutier with 17

Pearl earned the $1,000 Signature Gate Systems Big Fish of the Tournament award for his 6.69. Pearl came in about 45 minutes early due to engine trouble and parked along the tules across from takeoff. Killing time, he fished a worm until a snag claimed his bait.

“I remembered that I had Joseph Orozco at Bass Union make me some black/blue Arkie style jigs just for this tournament, so I pulled them out of my rod locker and flipped one with a black/blue Strike King Rodent,” Pearl said. “I flipped in there twice and on my third flip, that thing nearly took the rod out of my hand!”