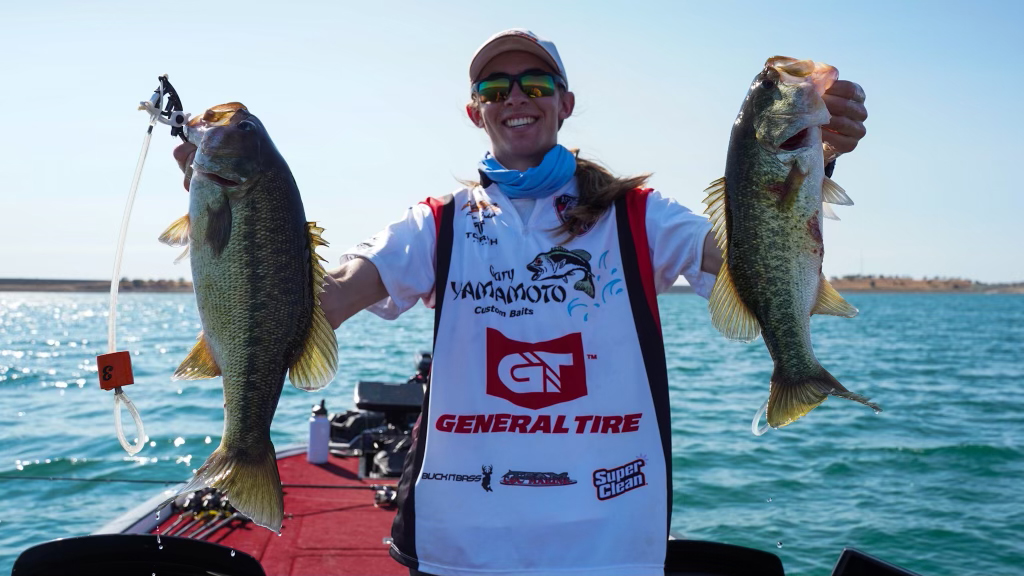 IONE, Calif. — Luke Johns of Folsom, Calif. dialed in a specific pattern based on best available habitat and amassed a total weight of 24.47 pounds to lead Day 1 of the APEX Cup on Lake Camanche presented by HUK Gear.

Tournament format included a 7 a.m.-12:30 p.m. session and a 2-6 p.m. session. During each session, competitors caught as many scorable bass (14-inch minimum) and kept the best five for weigh ins.

Spending both sessions in the main lake area, Johns targeted shallow island humps in 5-9 feet of water. Some were tucked close to the bank, while others rose from surrounding depths of 60 feet.

“The ones with sticks and shallow cover were the best, so I looked for anything with some type of brush on it,” Johns said. “I think it was key to find some kind of cover with as low as the lake is (down approximately 30-40 feet). This gave the fish somewhere to feed — it gave them shade and ambush points.

“I had to look and spot the cover, so my Torch Eyewear was key. I wear the Torch DNA with the Shallow Polarized lenses and that helped me see what I was looking for.”

Johns said he visited 20-25 spots, most of which were about 25 yards long. He fished each spot approximately 30 minutes before moving to the next one.

“I keyed in on the bite in the brush during the first session and I returned to that pattern in the second session,” Johns said. “In the afternoon session, I hit some of the same spots I had fished in the morning, but I started looking around for more places to fish. I ended up catching all of the fish I weighed in the afternoon on new spots.”

Camanche holds largemouth, smallmouth and spotted bass; and while Johns said he welcomed whatever species bit, largemouth dominated his day. He also caught a few spotted bass, one of which was his biggest fish — a 3 1/2- to 4-pounder.

Johns caught all of his fish with a finesse rig featuring a Yamamoto plastic bait. His Dobyns 702 and 703 spinning rods were essential to the precise presentations he needed.

Explaining the key to his opening round success, Johns said: “I’m fishing a lot slower than most people. I think there are fish to be caught with faster presentations, but with the technique I’m using, the only way they’d eat it was if I fished it extremely slow.”

Vijay Malhotra of Elk Grove, Calif. is in second place in the Total Weight standings with 24.04 pounds. Anchoring his weight with the day’s biggest bass — a 7.95 that bit around 9 a.m. — Malhotra said he spent a lot of time running and ultimately fished throughout the entire lake.

Noting that he fished 10 different spots, Malhotra said he was able to focus on one main pattern with multiple baits — a mix of reaction and dragging presentations.

“I stuck to what I practiced; I stuck to the game plan,” Malhotra said. “It was a tough bite. Camanche can be great, or it can be tough.”

Relying on his Humminbird mapping to show him the key areas, Malhotra caught all largemouth bass today. His Dobyns 734 rods performed well with a variety of presentations.

Uribe Jr. leads the Most Keepers standings with 14 fish. He started his day targeting largemouth on a shady bank where a shadow line provided relief from the sunny conditions.

“When the largemouth bite tapered off, I ended up fishing a little bit deeper and targeting spotted bass,” Uribe said. “I was catching (spots) with finesse baits in 20-25 feet of water on main lake humps.

Uribe said he relied heavily on his Daiwa rods and reels, along with Sunline braid, fluorocarbon and monofilament.

Johns and Phillip Dutra of Concord, Calif. are tied for second place in the Most Keepers standings with 11. Juan Acosta of Tracy, Calif. is in fourth with 10 and Gutierrez if fifth with 9.

After two days of full-field competition, the top-10 anglers advance to Sunday’s Championship round. The final field will comprise the top-5 anglers with the Most Keepers and the top-5 anglers with the highest Total Weight. Total days weight and keeper count from days 1 and 2 are accumulated. In the final round, weights and keeper count are zeroed.