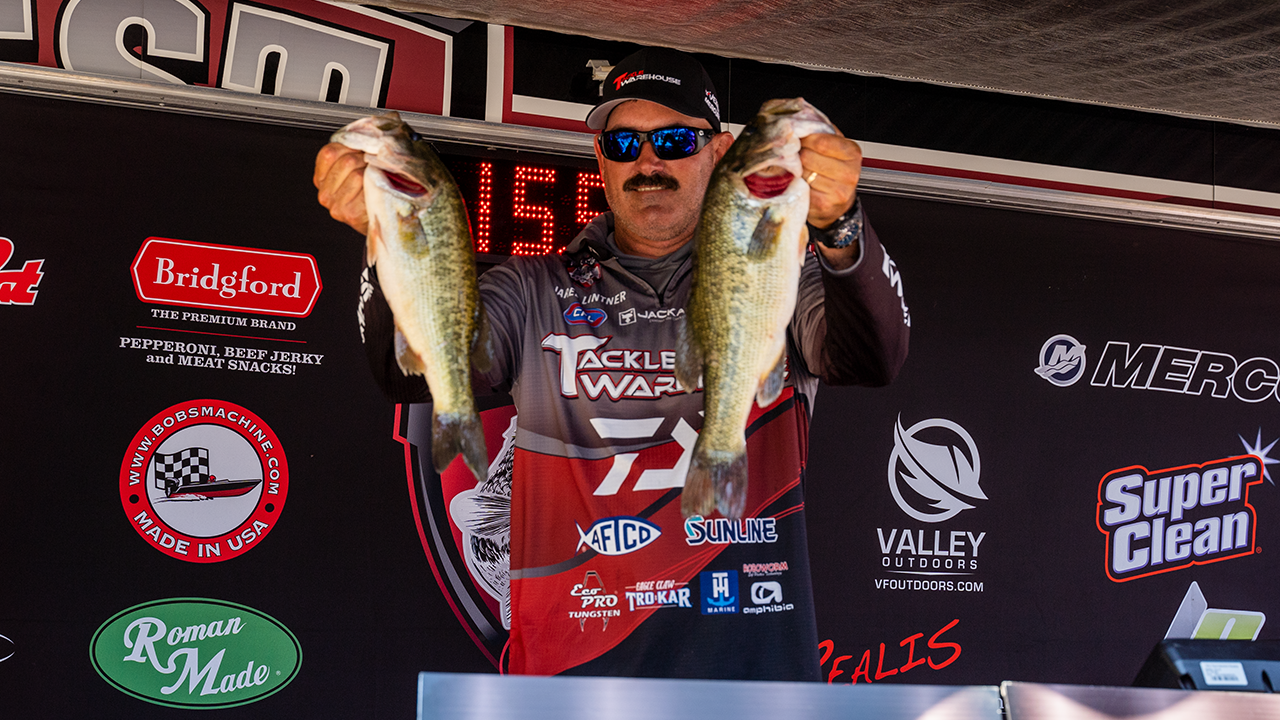 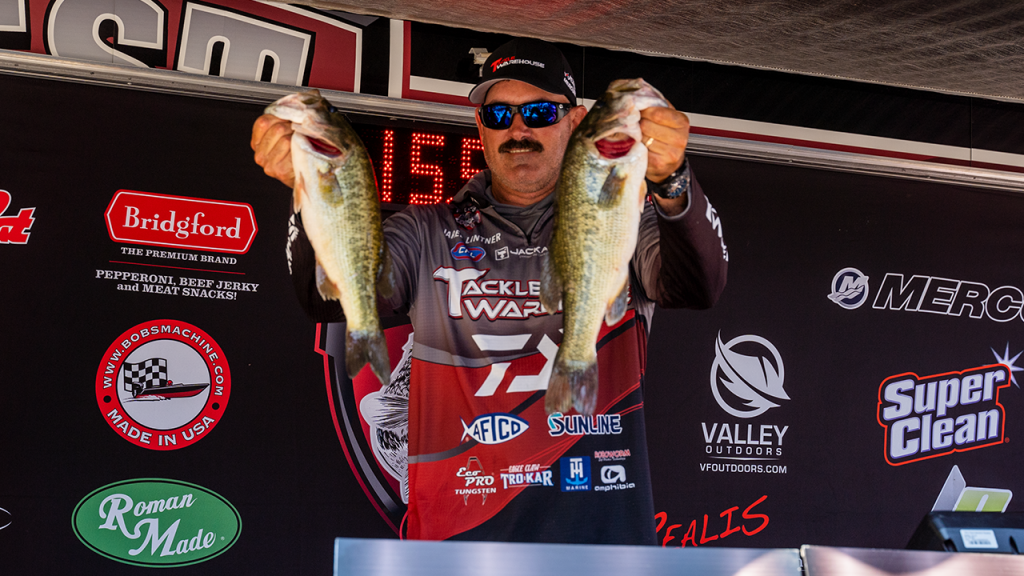 IONE, Calif. — Jared Lintner’s a versatile angler, but the seasoned pro from Arroyo Grande, Calif. employed a healthy dose of tunnel vision to lead Day 2 of the APEX Cup on Lake Camanche presented by HUK Gear with a two-day total of 36.29 pounds.

Tournament format allowed competitors to catch as many scorable bass (14-inch minimum) as possible and keep their best five for weigh ins. After placing third on Day 1 with 20.79, Lintner added 15.50 today.

Facing fierce heat, low water level and significant recreational boat and personal watercraft traffic, anglers largely lamented a tough day on Camanche. Lintner, who had not fished the lake since his late teens, combatted the challenging conditions by committing the majority of his time to a single reaction bait strategy.

Lintner focused his efforts on a particular scenario that occurs with no discernible pattern throughout the lake. He said he fished from the mouth of the Mokelumne River to the Camanche Dam, but only in selective locations.

“I know that’s a big area, but I was looking for a very specific structure, so I’m eliminating a lot of water,” Lintner said. “It’s not a guarantee, but when I find it, I usually get bit. It’s very random, but it’s not; if that makes sense.”

Noting the different presentations he used, Lintner said: “The fish are so moody, you have to slow way down, or go as fast as you can. I’m getting them to react.”

Hitting approximately 25 spots in depths of 1-8 feet, Lintner said he found the fish frustratingly inconsistent. Of his 19 bites, he hooked 10 and boated 8.

“It’s just the way they’re eating the bait this time of year,” Lintner said. “Not all of them are 100 percent committed. With some, I had to use pliers to get the hooks out, but some barely got it.”

Lintner also stressed the importance of fishing an 8:1 Daiwa SVTW reel loaded with with 60-pound Sunline FX2 Braid. Part of this was the habitat he fished; the other part was the need to quickly gather line and catch up to fish that either blasted away from the structure or ran right at the boat.

“I was around the right fish, but I didn’t get the right bites,” Johns said. “I could see big fish in the shallow water, but I couldn’t get them to bite.”

Returning to the same pattern he fished on Day 1, Johns targeted island humps in 5-9 feet of water. Using Torch DNA eyewear with Shallow Polarized lenses to spot his targets, Johns focused on the ones where shallow brush and sticks provided bass with shade and feeding opportunities.

“I think it was the wind; we had a bit more wind yesterday with waves breaking over the spots I was fishing,” Johns said of the his lower productivity. “Today, we had just a light breeze and I caught most of the fish on long casts. Yesterday, I could flip to spots 10 feet from the boat and catch them.”

Johns fished the same finesse rig with a Yamamoto bait that produced all of his Day 1 weight, but he also integrated another Yamamoto bait on a Texas rig.

Uribe Jr., who led the Most Keepers standings on Day 1 retained that spot with 20 fish. With all top-10 competitors starting tomorrow’s final round with a clean slate, he fished a conservative game plan.

“It went well and then I drove around the lake from 11 o’clock on and eliminated water. At the end of the day, right before I came in, I found one spot where I had three really nice fish follow a bait.”

Specifically targeting spotted bass, Uribe fished high spots in 20-25 feet at the river mouth. He caught his fish on a neko rig fished on a Daiwa rod and reel with Sunline braid and a Sunline fluorocarbon leader.

Lintner is in second place in the Most Keepers standings with 16. John Pearl of Upper Lake, Calif. is third with 16, followed by Zack Thompson of Alameda, Calif. with 16 and Johns with 14.

Following two days of full-field competition, the top-10 anglers advance to Sunday’s Championship round. The final field will comprise the top-5 anglers with the Most Keepers and the top-5 anglers with the highest Total Weight. Total days weight and keeper count from days 1 and 2 are accumulated. In the final round, weights and keeper count are zeroed.