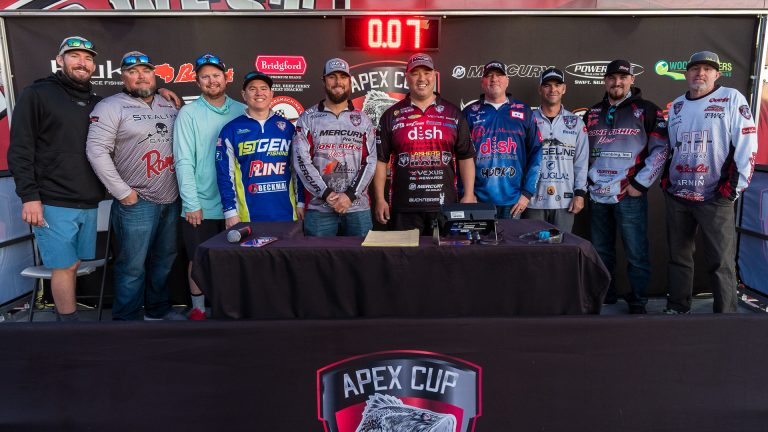 BULLHEAD CITY, Ariz. — Talk about your quick studies — in his first tournament on
Lake Mohave, Scott Hellesen leads the second round of competition in the 2022 APEX
Cup season-opener on Lake Mohave presented by Golden Entertainment with a two-
day total of 27.30 pounds.
After placing third on Day 1 with a limit catch of 14.88, the pro from Whittier, Calif.
added four scorable bass for 12.42. After a windy opening round, Day 2 brought mostly
light breezes that proved challenging.
“It was a lot calmer today and I had to adjust,” Hellesen said. “I could see the fish, but
they were tougher to catch. I was fishing in 10-20 feet, but you can literally see down 30
feet.”
With a bag comprising all smallmouth, Hellesen focused on main lake points. Instead of
looking for bigger bites, he had planned to play the numbers game to ensure he
qualified for Sunday’s Championship round. As it turned out, he found two fish that were
pushing 5 pounds each.
“I caught one of the two big ones on my first spot,” Hellesen said. “I fished around and
came back to the same area and caught that second big one around 10.”
Despite his lack of Lake Mohave experience, Hellesen said he came into this event
familiar with the game he needed to play.
“I fish the dessert lakes like Mead and Havasu, so I know how to fish (this scenario),” he
said. “You cover a ton of water and don’t stay in one place too long, so I applied that
here here too.”
Using a 7-foot medium-light Stealth Stix Skinny Pete rod with a braid-to-fluoro setup
including 6-pound Sunline SX1 and Seaguar Tatsu, Hellesen caught his fish on a 2.8
Keitech Swing Impact Fat in the electric shad color rigged on a 1/4-ounce bull head
jig.
“I was trying to sight fish and I was just casting that around while I was looking. Hellesen
said. “I had a few follow it and ended up tricking a few of them,”
Day 1 saw Hellesen spending his day close to the take-off site. Knowing he was in good
position after a solid opening effort, Hellesen expanded a little farther on Day 2, but
remained within 7 miles.
Addressing his final round plan, Hellesen said: “Tomorrow, I’ll stay close. That’s where
all my good bites came from.”

Jason Austin of Ione, Calif is in second place in the Total Weight standings with 26.52
pounds. Austin placed ninth on Day 1 with a limit catch of 12.09 and added another limit
of 14.43.
Making his second consecutive top-10 (including the 2021 Wild West Bass Trail Pro-Am
Championship on the California Delta) Austin fished the lake’s south end and focused
on points leading into flats where prespawn bass were staging around larger rocks. His
limit included three largemouth and two smallmouth.”
“I think that will benefit me tomorrow because my two largest were late in the day,”
Austin said. “One was a 5 1/2-pound largemouth and one was a 3 1/2-pound
largemouth.
“The wind picked up and started blowing out of a different direction in the afternoon. The
wind had been blowing out of the south and then it switched to the north and that ignited
the largemouth.”
Austin caught all of his fish on a Yamamoto Hula Grub rigged on 1/2-ounce Ed’s Lead
custom football head. Downsizing to 10-pound PLine Tactical fluorocarbon, instead
of his usual 12-pound preference, Austin threw his bait to the bank and worked it back
to 45 feet of water.
Rounding out the top-5 were John Pearl of Upper Lake, Calif. with 25.62, Thomas
Kanemoto of Elk Grove, Calif. with 25.42 and Randy McAbee of Bakersfield, Calif. with
21.97.
McAbee also leads the second round’s Most Scorable Bass standings with seven. He
opted to run 20 miles north to fish flatter areas that warm up faster.
“I was fishing big main lake points, about a quarter mile offshore,” McAbee said. “I’m
trying to find the fresh fish that are just coming up because they haven’t seen a million
baits and they seem to be a little easier to catch.
“The fish are right on the ends of these points, right before they drop off into deep water.
If you can find a mix of grass and rocks it’s almost guaranteed.”
Fishing a First Gen reaction bait extremely slow and on the bottom, McAbee said he
was not feeling the bites; the rod would simply load when a fish bit. Arming himself with
the right rod proved critical.
“I’m using my Stealth Stix rods with carbon fiber handles,” McAbee said. “The more
sensitivity the better because it’s such a subtle bite.”
Austin, Pearl and Kanemoto tied for second place in Day 2’s Most Scorable Bass
standings with 5. After two days of competition, anglers qualifying for Sunday’s
championship round via Scorable Bass needed a total of eight.

After two days of full-field competition, the top-10 anglers advance to Sunday’s
Championship round. The final field will comprise the top-5 anglers with the Most
Scorable Bass and the top-5 anglers with the highest Total Weight. Total days weight
and keeper count from days 1 and 2 are accumulated. In the final round, weights and
keeper count are zeroed.
Sunday’s takeoff is scheduled for 7:45 a.m. MST at Katherine Landing at Lake Mohave
Marina. The weigh-in will be held at the Aquarius Casino Resort in Laughlin, NV at 4:30 p.m.