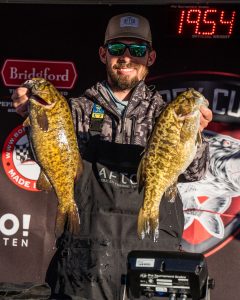 BULLHEAD CITY, AZ — The good ones make it look easy, but Austin Bonjour of
Atascadero, Calif. said he had a tough time squeezing a limit of 19.54 pounds out of
Lake Mohave to lead Day-1 of the 2022 APEX Cup season-opener presented by
Golden Entertainment.
Leading second-place competitor Colby Pearson by more than 4 pounds, Bonjour said
that despite the stingy conditions, he was thrilled with his opening performance.
“It was one of the days you dream about,” Bonjour said. “It was more of a mentality
thing — just knocking down a ton of water and catching whatever bit. I got seven bites
and caught six fish.”
Covering approximately 30 miles from the takeoff site (Katherine Landing at Lake
Mohave Marina) to the lake’s north end, Bonjour reported catching fish throughout that
range. Doing so, he said, was predictably random.
“I was expecting it to be tough because it’s a Colorado River lake and they fish tough,”
he said. “If you’re around them, they’re easy to catch, but if you’re not around them,
they’re almost impossible to catch.
“I have something I’m looking for throughout the lake. It’s a certain sand and rock
combination on primary points.”
Targeting early prespawn smallmouth, Bonjour employed what he called a power
finesse technique. Fishing an iRod 722 Air with 8-pound Daiwa J Braid main line tied
to an 8-pound Seaguar InvisX fluorocarbon leader, he stayed on the move to hit as
many spots as possible, but he made precise casts with slow retrieves on each spot.
“Only one time, I caught two on one spot; the other times were just one fish per spot,”
Bonjour said. “I found you were better off to just keep moving and and keep keying in on
a certain type of structure. I fished 75 points and caught six fish.”
With Lake Mohave turning rough, Bonjour praised the waterproof comfort of his AFTCO
Barricade rain suit, which protected him from the 2- to 4-foot waves breaking over the
side of his boat. Regardless of what weather Day 2 brings, Bonjour said he’s not letting
a big lead go to his head.
“There’s no change to the game plan,” he said. “I’m just going to catch what bites.”
Hailing from Rogue River, Oregon, Pearson weighed four smallmouth and one
largemouth for 15.37. Despite the mixed bag, he noted that he was targeting the brown
fish — his personal preference.

“Coming from Oregon and fishing in Northern California, 90 percent of my fun fishing
trips are for smallmouth, so I’m very familiar with them,” Pearson said. “You hear ‘a
bass is a bass’ a lot, but I think that it’s particularly true for smallmouth. Seven out of 10
times, they’re going to do what they’re supposed to do.”
Leveraging his smallmouth knowledge, Pearson stayed in the lake’s main basin, fished
in less than 20 feet and focused on what he described as winter-spring transition areas.
Fishing a mix of reaction baits, including Duo Realis Spybaits and Jerkbaits on iRod
703 Genesis 3 rods with 7.4:1 Shimano Metanium reels and Seaguar InvisX
fluorocarbon, Pearson was strategically discerning with his casts.
“I was targeting specific size rocks and boulders in primary winter transition zones —
points relating to creek channels and breaks,” Pearson said. “These were the first
places I could find them transitioning from where they’ve lived the last two months to
where they’re going to be next month.”
Scott Hellesen of Whittier, Calif. placed third with 14.88. Making his first visit to Lake
Mohave, he decided to remain close to the take-off site and maximize his time. Doing so
produced nine keepers.
“I fished mostly points, both primary and secondary,” Hellesen said. “The points
had to have some type of rock. The largemouth seemed to like the steeper rocks
that produces shade and the smallmouth preferred baseball sized rock.
After fishing reaction baits in the morning, Hellesen transitioned to finesse
presentations with Roboworms and Senkos in the afternoon. Essential to his
finesse presentations was a braid-to-fluoro setup with 6-pound Sunline SX1 and
Seaguar Tatsu.
Rounding out the top-5 were Nick Wood of Montague, Calif. with 14.11 and Ish Monroe
of Oakdale, Calif. with 14.06.
After two days of full-field competition, the top-10 anglers advance to Sunday’s
Championship round. The final field will comprise the top-5 anglers with the Most
Keepers and the top-5 anglers with the highest Total Weight. Total days weight and
keeper count from days 1 and 2 are accumulated. In the final round, weights and keeper
count are zeroed.
Saturday’s takeoff is scheduled for 7:45 a.m. MST at Katherine Landing at Lake
Mohave Marina. The weigh-in will be held at the marina at 3:45 p.m.