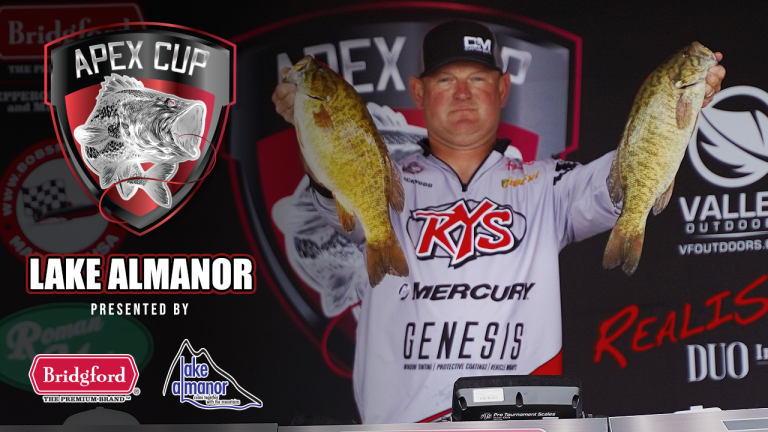 CHESTER, Calif. — Patiently waiting for the right conditions and then seizing his opportunities, Nick Wood of Little Shasta, Calif. tallied 17.59 pounds to lead Day 1 of the APEX Cup on Lake Almanor presented by Bridgeford Outdoors.

Fishing the lake’s upper end, Wood started his day by looking for bed fish around stumps in 3 1/2-4 feet of water. Visibility is always essential to bed fishing, but Wood said the lake’s complexion proved challenging.

“The water was super stained; the conditions had to be perfect for you to see them,” Wood said. “I had to wait until about 10 o’clock when the sun got high enough with no breeze.

“You’d go along and see a stump and then you’d see a bed fish swim off the stump and you’d circle back around. They were really hard to catch.”

Wood caught his bed fish on a dropshot with a 3.8-inch Keitech Swing Impact in pearl. He used a 2/0 Roboworm rebarb hook, a 4- to 6-inch leader and a 1/4-ounce weight.

“If I kept it in the bed, they weren’t really reacting to it,” Wood said. “I had to cast past the bed and hop the bait to the bed. That seemed to get them more fired up.

The afternoon found Wood transitioning to the mid-lake region, where he looked for prespawn fish on long, tapering points with scattered rock. Fishing in 8-10 feet, he caught his fish on a 3/16-ounce dart head with a 3.8-inch Keitech Swing Impact in Tennessee shad.

“I got about 8-9 bites today,” Wood said. “I caught a 4-pounder and then about 4 casts later, I lost another one just as big right at the boat.”

Bill O’Shinn of Auburn, Calif. is in second place in the Total Weight standings with 16.19. Focusing on stump flats in 3-6 feet, he targeted fish that were in or near their spawning movement.

“The fish were just kind of roaming around the spawning area; they weren’t really on beds — they were around beds,” O’Shinn said. “I’d see them and they’d pull off and then I’d come back and cast to them.”

Mixing up his presentations with worms and reaction baits, O’Shinn said he found it difficult to engage these spooky fish. Exercising patience and trying multiple casting angles proved most effective.

“The key was going very slow and paying attention to exactly where they were,” O’Shinn said. “I was marking them, staying way off of them and trying not to spook them.

Hunter Schlander of Modesto, Calif. leads the Most Keepers standings with 11. Looking for prespawn smallmouth in Almanor’s north end, he targeted large boulders in 15-20 feet.

“I used the dropshot later in the day when it slicked off,” Schlander said. “I used a 1/4-ounce weight and, with the clear water, I used a longer leader — about a foot and a half. That kept the bait up off the bottom and they’d come from a long distance and eat it.”

Nick Salvucci of Paso Robles, Calif. is in second place with 9 keepers. Fishing chunk rock banks, he was targeting prespawn fish in a depth range of 1-15 feet.

“I was just kind of junk fishing with reaction baits like crankbaits and swimbaits,” Salvucci said. “This was the first time I’ve ever been to this lake, so I was just going blind down the bank.

Rounding out the top-5 were Travis Huckaby with 9 fish, Matt Saavedra with 8 and Ronald Bruggeman with 8.

After two days of full-field competition, the top-10 anglers advance to Sunday’s Championship round. The final field will comprise the top-5 anglers with the Most Keepers and the top-5 anglers with the highest Total Weight. Total days weight and keeper count from days 1 and 2 will be cumulative. In the final round, weights and keeper count are zeroed.