Wood Adjusts to Maintain Lead at APEX CUP on Almanor 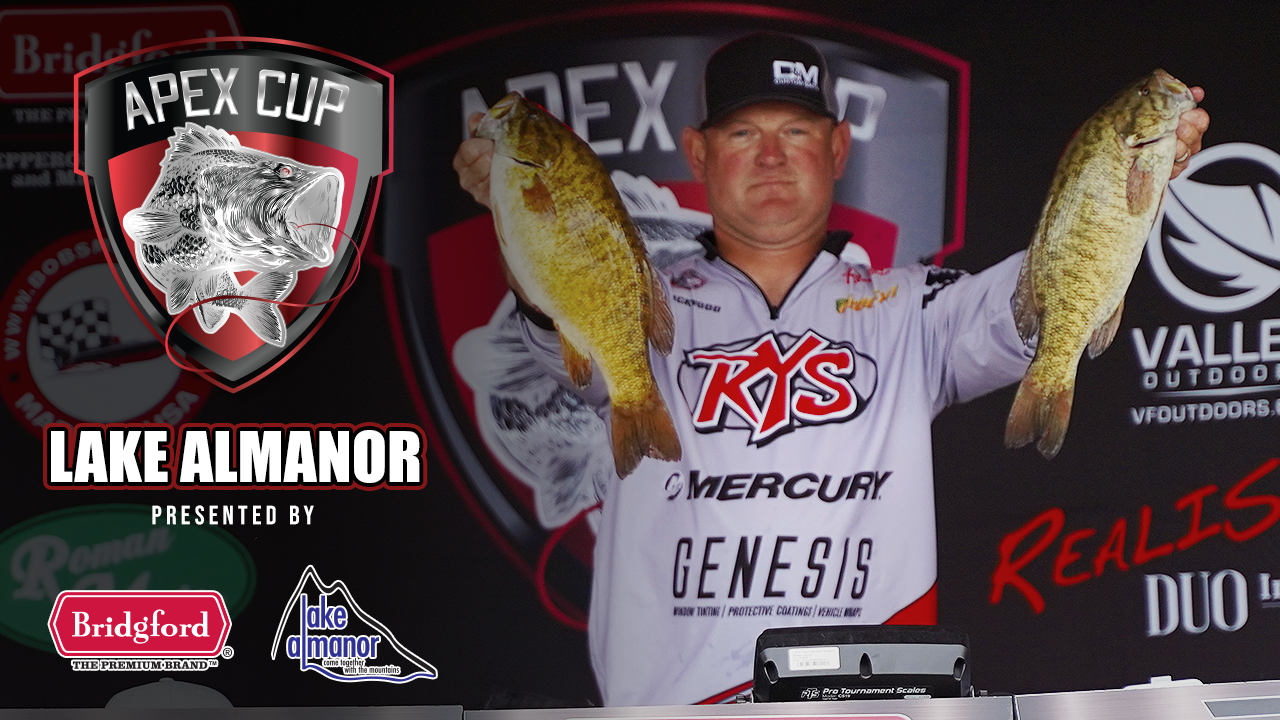 CHESTER, Calif. — Adjusting to a changing weather scenario, Day-1 leader Nick Wood of Little Shasta, Calif. added 14.51 pounds to his first-round weight of 17.59 and tallied a 2-day total of 32.10 pounds to lead Day 2 of the APEX Cup on Lake Almanor presented by Bridgeford Outdoors.

An approaching cold front brought big winds and cloudy skies that significantly limited visibility. This prompted Wood to completely scrap the strategy he pursued for most of Day 1.

“On my first cast this morning, I caught a 3 1/2-pounder, then it was a grind,” Wood said. “It turned back on around 1. I had a limit at that point and I upgraded one time.

“It was a very soft bite. I think the fishing pressure is starting to get to them. I lost a couple of big ones and I should have had a better bag. But I keep my head above water and made the final day.”

Austin Wilson of Citrus Heights, Calif. is in second place in the Total Weight standings with 31.77 pounds. Sticking with the same plan he followed on Day 1, Wilson committed to bed fishing in 3-5 feet, but found today’s complexion more challenging.

“Yesterday was warm, with a light chop, but today was cloudy with a little rain and more wind,” Wilson said. “It was definitely harder to see, but the fish I found yesterday, I marked them and today I was just fishing where I knew they were (located).”

Most of Wilson’s bed fish were positioned next to stumps, so he threw a 4-inch green pumpkin Senko. He Texas rigged the unweighted bait on a 2/0 Gamakatsu finesse EWG hook, because this presentation came through the stumps’ spindly roots most efficiently.

At the end of the day, Wilson caught one bed fish on a 4-inch Keitech Easy Shiner in the silver flash minnow color on a 2/0 Gamakatsu finesse EWG hook with half a nail weigh in the belly. This one, he said required a stealthy game.

While searching a bank, Wilson spotted the fish bolt from its bed, so he pitched the swimbait toward the target and kept moving forward, as he payed out line. When he had progressed about 20 feet from the bed, he closed his bail and came tight on his biggest fish of the day — a 3 1/2-pound smallmouth.

Nick Salvucci of Paso Robles, Calif. leads the Most Keepers standings with a 2-day total of 27. Placing second on Day 1 with 9 keepers, Salvucci added 18 today.

“I was targeting chunk rock banks with a rip bait, a swimbait and a crankbait,” Salvucci said. “I hit about four areas that produced. I had two areas that I made a milk run between them, but then a bunch of boats came in there and I had to leave.

P.J. Bruggeman of Potter Valley, Calif. is in second place in the Most Keepers standings. After starting his morning with a couple small bed fish, he turned his attention to prespawners. Fishing multiple areas of the lake, Bruggeman focused on 1- to 5-foot flats with stumps.

“I was fishing flats that were close to spawning areas; flats that I figured they would pull up to spawn, had the cold front not moved in,” Bruggeman said. “Wind exposure was big today. Anywhere I knew it was blowing hard, I went in there. That (disturbed the surface) and made it to where they couldn’t see as good.”

Bruggeman caught his prespawners on a Megabass Vision 110+2. He started with a bone color and found better response when he switched to a green/white pattern.

After two days of full-field competition, the top-10 anglers advance to Sunday’s Championship round. The final field will comprise the top-5 anglers with the Most Keepers and the top-5 anglers with the highest Total Weight. Total days weight and keeper count from days 1 and 2 are accumulated. In the final round, weights and keeper count are zeroed.