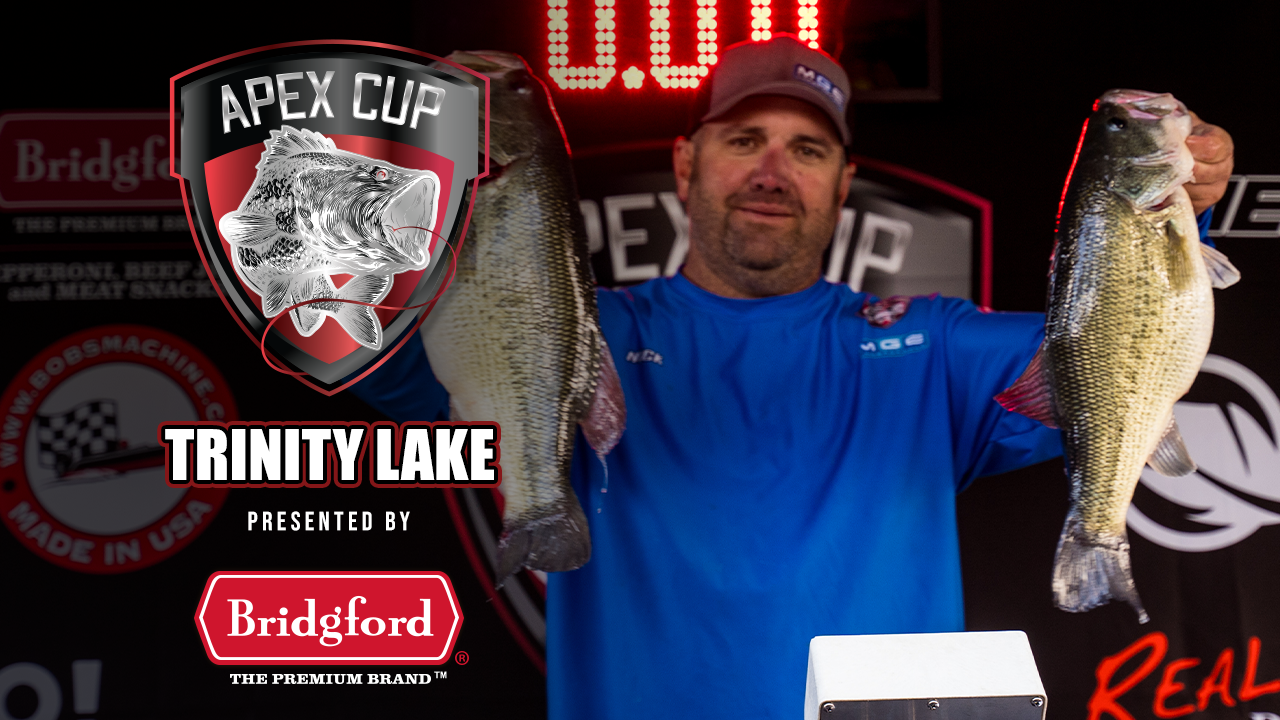 REDDING, Calif. — Nick Salvucci split his time between professional angler and security guard, but that’s what it took to tally a two-day total of 55.66 pounds and maintain his lead on Day 2 of the APEX Pro Tour event on Trinity Lake presented by Bridgeford Outdoors.

Salvucci, who also leads the Most Scorable Bass standings with 94 (62 on Day 1, 32 on Day 2), added 23.36 to the 32.30 he weighed on Day 1. Returning to the rocky bottom in Trinity’s upper end where he caught his first-round fish, Salvucci’s productivity was significantly lower today — intentionally so.

“I only fished for, like two hours today, then I just took a nap, put my feet in the water and just protected my spot,” he said. “I stayed on the outskirts of (my main spot) and caught my weight and then I just quit fishing about 9:30-10 o’clock.

Salvucci caught his fish in 10-15 feet on what he described as a prespawn staging area. The action, he said, was just as steady as it was on Day 1.

“It’s pretty consistent,” Salvucci said. “These fish have spawning on their mind, so they’re moving up and feeding right now. It’s a good time to be here; they’re wanting to eat.

“I just wanted to catch 10-20 keepers today. I was about to stop when I looked at the cameraman and said ‘One more cast.’ I made a cast and caught my biggest fish — a 6-pounder.”

Salvucci caught his fish on the same three swimbaits that produced his Day-1 catch. He’s rotating through his selection to show the fish different sizes and colors. Salvucci threw his swimbaits on G.Loomis rods and Shimano reels spooled with 20-pound Sunline Shooter fluorocarbon.

“These fish fight hard and that line never breaks,” he said.

Noting the precision element of his casting, Salvucci said: “There are (particular) angles. You have to be right on the break and use slow retrieves, bumping bottom.”

Salvucci said he’ll step on the gas for Day 3: “I might throw some bigger swimbaits tomorrow, because I don’t care about keepers.

“I’m going to go to the juice first thing tomorrow but I had two boats fishing close to me today and they both caught 25 pounds — right behind me and right in front of me. My area has gotten smaller, so I may go beat up my area and then just go look for new water in the afternoon.

Joe Uribe Jr. of Surprise, Ariz. remained at second place in the Overall Weight Division with 51.65. Returning to the same north end spot he fished on Day 1, Uribe added 22.99 to the 28.66 he weighed on Day 1.

“Yesterday, I didn’t find my spot until noon, but I started there today and never left,” Uribe said. “There were a lot of smaller fish on my spot. I could see the good ones, but I don’t know it they just weren’t active, or it there were so many small ones that were attacking the bait before the big ones.

“I plucked them off, but I didn’t want to catch too many good ones on that spot, so I kind of laid off and fished around it. I caught enough to allow me to get into Championship Sunday.”

Uribe caught all of his fish on his Uribe Magic Swimmer in a Kokanee color. He threw this bait on a Daiwa Tatula Elite Swimbait Rod with a Daiwa Tatula 103SV reel and 20-pound Sunline FC Sniper fluorocarbon. Long, slow retrieves were most productive.

“I definitely used my Garmin Livescope today; not only to study the spot, but to target fish,” Uribe said. “The fish are moving around on the flat. I’m just casting past them and slow rolling it to them.”

Nick Cloutier of Oakley, Calif. is second in the Most Scorable Bass division with 73. After  tying Jeff Michels for fifth place on Day 1 with 22, Cloutier added 51 today.

Fishing the lake’s north end, Cloutier spent his day on one rock pile in 15 feet. A mix of reaction and finesse baits did the trick for him.

“I started out throwing a Rive2Sea TacticalBassin DD crankbait until they’d stop biting and then I’d switch to a 1/4-ounce ball head with a 3.3 Keitech Swing impact Fat in electric shad,” Cloutier said. “I caught them all day long; it never stopped.

Cloutier, whose best five weighed 24.49 caught mostly largemouth, including a pair of 6-pounders.

John Stewart of Peoria, Ariz. leads the Big Fish standings with an 8.16-pounder.

After two days of full-field competition, the top-10 anglers advance to Sunday’s Championship round. The final field will comprise the top-5 anglers with the Most Scorable Bass and the top-5 anglers with the highest Total Weight. Total days weight and keeper count from days 1 and 2 are accumulated. In the final round, weights and keeper count are zeroed.

Anglers take off from Trinity Lake Resorts and Marina on Saturday at safe light. Weigh ins are set for 3 p.m. PST at the marina.