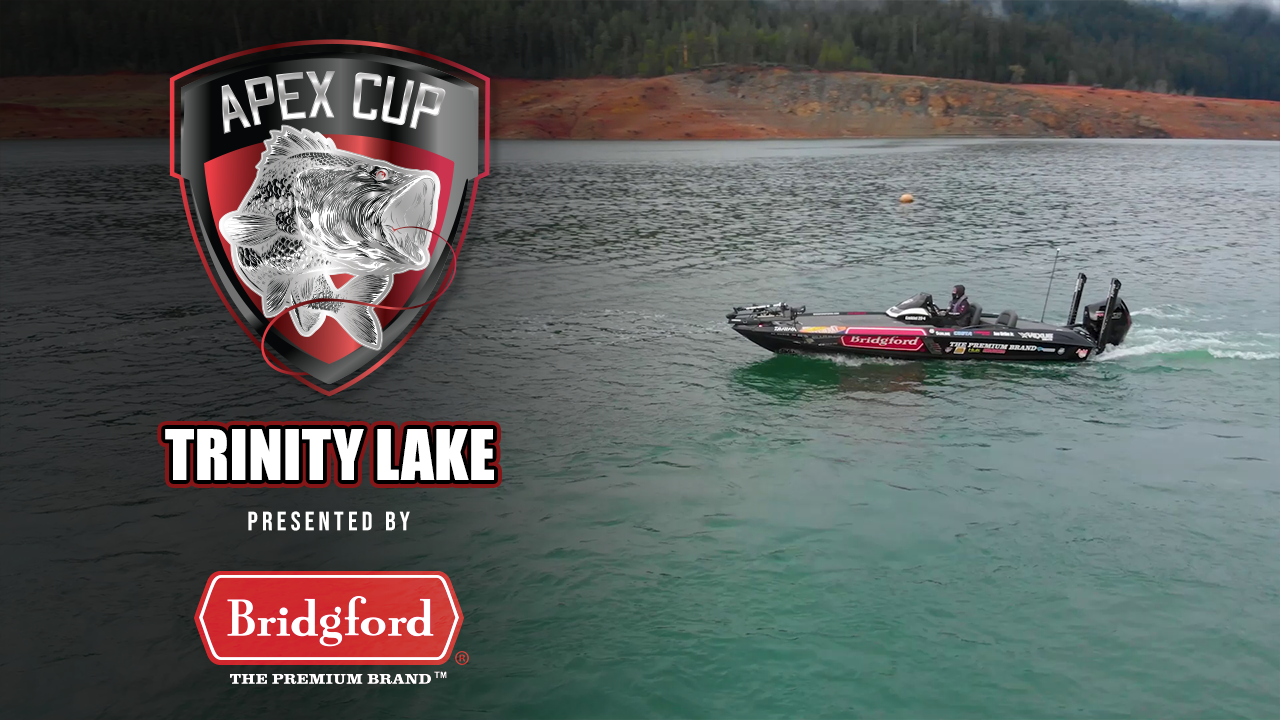 REDDING, Calif. — The most telling stat from Day-1 of the APEX Cup on Trinity Lake presented by Bridgeford Outdoors was two hours. That’s how much time Nick Salvucci spent recording scorable bass en route to sacking up the leading limit of 32.30 pounds.

“I caught 62 keepers and it takes me about 2 minutes to measure a fish, input the catch and release the fish, so that’s about two hours of my day spent inputting scorable bass,” Salvucci said.

After an hour-long weather delay, Salvucci started on a mid-lake spot, but found himself sharing the area with other boats. Relocating, he settled into an area of rock and clay that had all the makings of a prespawn staging zone.

“I started on a spot and I had a couple of boats pull up on me,” Salvucci said. “I’ve never been here before and I don’t like fishing around other boats, so I made like 15 casts and then ran about a half mile just to be by myself.

“I pulled up on a good stretch and it got pretty stupid.”

Also leading the Most Scorable Bass standings, Salvucci anchored his bag with a 7 1/2-pound largemouth. He said he culled out a 25-pound bag today.

“I have a video of me culling a 6-pounder and I culled two 5-pound smallmouth” Salvucci said. “It was pretty fun. My hand is worn to the bone.”

Working two main areas within a mile of one another, Salvucci caught his fish on a trio of swimbaits. Showing the fish different colors and profiles kept the party rocking.

“I started catching them right away in the morning and caught them all day,” Salvucci said. “I’d catch them on one bait and when the bite slowed down, I’d pick up another rod and start catching them again.”

While he was elated with his day’s results, Salvucci said he’s not overthinking this one.

“I just went fishing; I imagine there’s some luck involved,” he said. “They were chewing. These fish are fat and feeding up right now.”

Sizing up his Day-2 options, Salvucci said there’s no sense in beating up the fish he may need on Championship Sunday. Carrying a lead of 3.64 into Day 2, he’ll likely give his main spot a rest and hope that the fish stay put another day.

“I may just go try other places,” Salvucci said. “I won’t try to catch another big bag tomorrow. I just need to make the cut and then go catch them on Day 3.”

Joe Uribe of Surprise, Ariz. is in second place in the Total Weight standings with 28.66 pounds. Making his first trip to Trinity, he started in the lake’s main body, but wasn’t happy with his findings. Heading north was a good call, as Uribe landed on the only spot he’d need for the rest of the day.

“I spot locked at noon and never pulled up my Lowrance Ghost trolling motor until it was time to go,” Uribe said. “I’m not really sure what the spot was. It’s some kind of rock formation in 10-15 feet. I can see it on my Garmin Livescope and it looks pretty gnarly.

“It was just luck. I pulled up on the area after finding it on my Lakemaster map. It’s not a deep area; I think it’s an area where they’re staging and getting ready to spawn.”

Patience was key for Uribe said, as the action came and went.

“I had to wait them out,” Uribe said. “I would get a flurry going and then it would stop and I’d have to wait for them to start biting again. I caught 26 keepers, three of which were smallmouth.”

Stewart leads the Big Fish standings with an 8.16-pounder.

Stan Lefever of Lodi, Calif. is in second place in the Most Scorable Bass standings with 33. Placing 30th in the Total Weight standings with 15.86, Lefever said his morning started slowly, but once he picked up a subtle clue, the flood gates opened.

“I didn’t figure it out until 11; I only had four fish at that time and then I caught the majority of my fish after that,” he said. “I drove over a point and saw one fish on the graph. I turned around and I caught it. That’s kinda what clued me in.”

“I caught them on points heading into the backs of creeks. I can’t see them on my graph; I just have to fish for them. But when you catch one, you catch 10.”

Lefever caught all of his fish by slow dragging a dropshot with a homemade 2 1/2-inch white worm and a 1/4-ounce weight. Noting that he’s found this bait effective for smallmouth in the past, he said all but one of his fish were smallies.

Rounding out the top-5 Bill O’Shinn with 29 Scorable Bass, Uribe with 26 and Jeff Michels and Nick Cloutier who are tied with 22.

After two days of full-field competition, the top-10 anglers advance to Sunday’s Championship round. The final field will comprise the top-5 anglers with the Most Scorable Bass and the top-5 anglers with the highest Total Weight. Total days weight and keeper count from days 1 and 2 are accumulated. In the final round, weights and keeper count are zeroed.

Anglers take off from Trinity Lake Resorts and Marina on Saturday at safe light. Weigh ins are set for 3 p.m. PST at the marina.