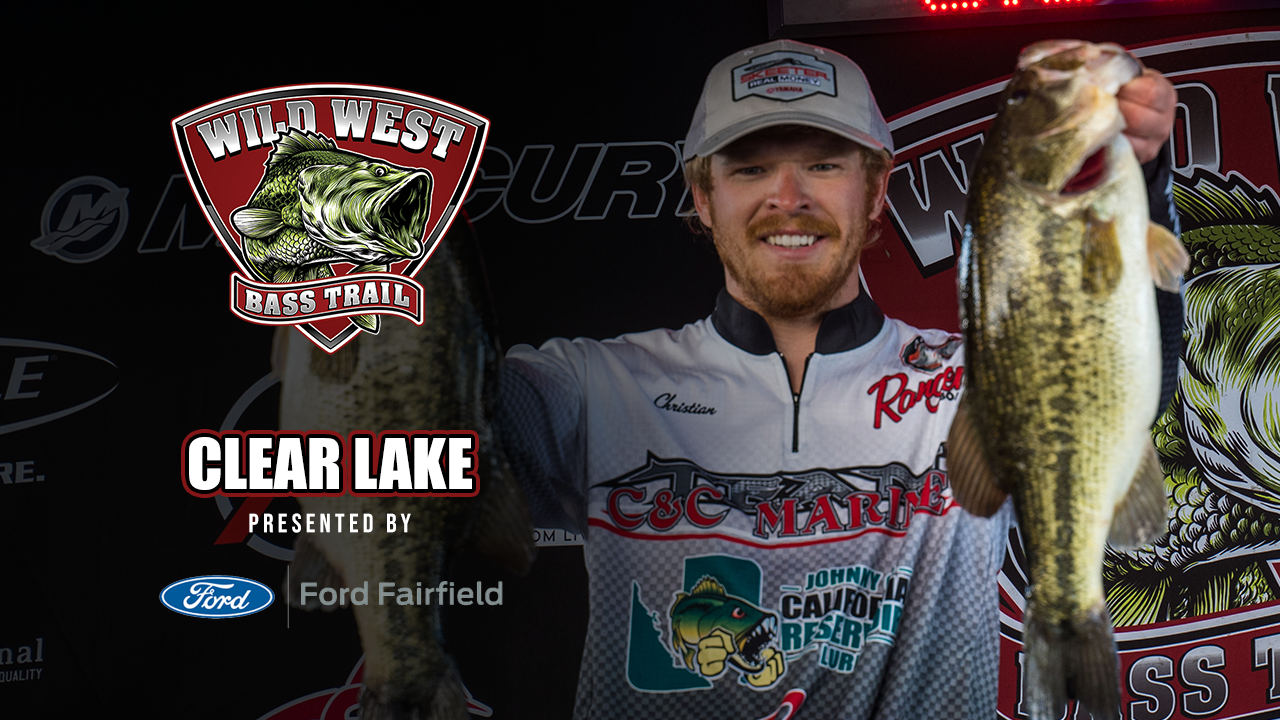 By David A. Brown
LAKEPORT, Calif. — Making a key tactical adjustment, APEX Cup pro Christian Ostrander of Turlock, Calif. sacked up a big limit and surged into the Day 2 lead with a total weight of 48.86 at the Wild West Bass Trail Clear Lake Pro-Am presented by Ford Fairfield.

Placing ninth on Day 1 with 21.73, Ostrander changed his methods and sacked up a second-round limit of 27.13 — the event’s heaviest bag.

Spending both of his days in the Rattlesnake Arm, Ostrander has identified 10 spots comprising shallow weed beds in 3-4 feet going into spawning areas. The key, he said, was identifying unpressured areas.

“I had no clue which spots would be best,” Ostrander said. “I knew the spots had big ones on them but there were three to four that had really big ones.

“It was just getting them when they’re rolled up on the spots. They’ll be around, but not active. Then, you’ll roll up on a spot and they’ll eat.”

The key to making these moments happen was twofold.

“The first day, I didn’t rotate those spots until later in the day, because I didn’t think it was going down,” Ostrander said. “Today, I started rotating my spots earlier.

“Yesterday, I threw more swimbaits to get big ones. I tried to chuck a swimbait all day on spots where I knew there were 1-2 good ones. Today, I just targeted schools.”

Rotating baits and ripping them through the grass was the successful pattern. Ostrander said his bite improved as the day wore on. He caught his two biggest ones later in the day.

APEX pro John Pearl of Upper Lake is in second place with 46.94. After placing third on Day 1 with 23.42, Pearl nearly mirrored his opening performance by adding 23.52. He did so by returning to the north end grass where he started.

“I fished the same area, but a different spot,” Pearl said. “I had to go to my back-up of my back-up, but I pulled up and caught 50 fish.

Similar to Day 1, Pearl used a mix of lipless baits and glidebaits, including a G-Ratt Baits Sneaky Pete.

“Today, I caught them on two different glidebaits and two different (lipless baits),” Pearl said. “I had to mix up the retrieves all day. It just kept changing as the weather changed. On my last spot, they wanted a medium speed.

“The worst part is I haven’t caught a big one; I’ve caught cookie-cutter 4-pounders. I need to catch a 7-pounder tomorrow if I’m going to have a chance to win.”

Travis Williams of Brentwood, Calif. is in third place with 45.02. Turning in daily weights of 23.23 and 21.79, Williams stuck with his the same game plan he followed on Day 1.

“I’m fishing the same 200-yard stretch of bank in the Rattlesnake Arm and targeting grass patches in 3-4 feet,” Williams said. “The grass is sparse and that’s the key — when you can find it, they’re in it.

“There were definite periods of activity. Today it was 11 o’clock and yesterday, it all went down at 2. It was all about persistence; you just had to be there when they wanted to come up and feed.”

“You just had to make precise casts,” Williams said. “I’m looking at the patches on Garmin LiveScope and casting to them.”

Rick Correa of Wilsonville, Or. is in the lead for Big Bass honors with his 10.88.

Kyle Sipe of Phoenix, Ariz. leads the co-angler division with 37.25. His remarkably consistent daily weights of 18.29 and 18.96 bespoke a fortunate back-deck experience.

“I got lucky in that both of my pros were fishing similar stuff,” Sipe said. “My pro on Day 1 clued me in on a reaction style presentation, but had to know when to slow it down.”

Targeting prespawn fish at multiple depths, Sipe said he found his fish more action in the morning hours — likely due to the weekend’s full moon phase.

Ryan Luke of Ione, Calif. holds the Big Bass lead among co-anglers with a 9.42.

Sunday’s takeoff is scheduled for 7 a.m. Pacific Time at Library Park. The weigh-in will be held at the park at 3:10 p.m.