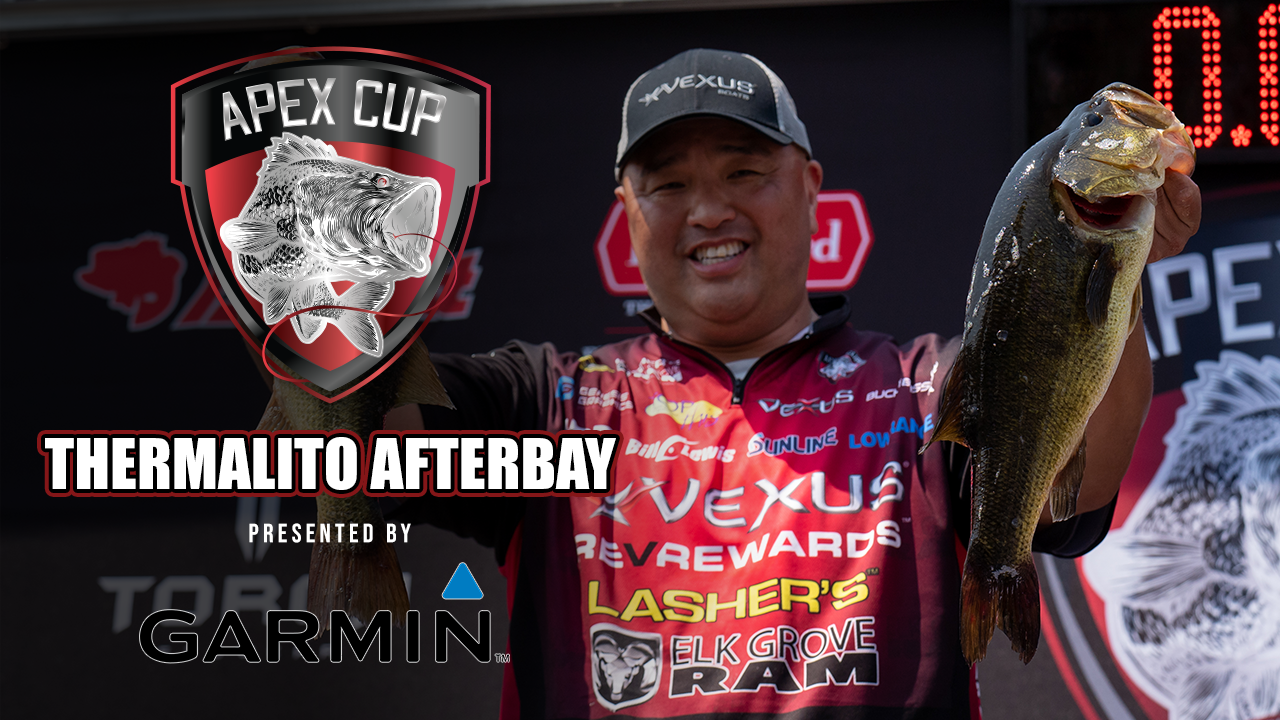 OROVILLE, Calif. — A little less weight on his mind plus a little more weight on his line led to a dominant performance for Elk Grove, California’s Ken Mah, who sacked up a limit of 19.44 pounds to win the APEX Cup on Thermalito Afterbay presented by Garmin Fish & Hunt and DUO International.

Lighting up the final round with the event’s heaviest catch, Mah earned the APEX Cup championship trophy along with the first place purse.

One of the top names in western competition and a driving force behind APEX CUP development, Mah was clearly overcome with emotion driven by the magnitude of his achievement. 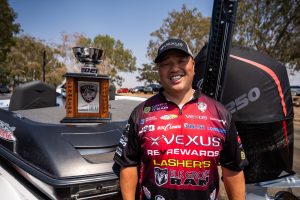 New to tournament waters, Mah studied Google satellite imagery and found areas resembling the Clear Lake and California Delta habitat he knows intimately. Focusing on an attractive stretch with mixed vegetation in the lake’s southeast region, Mah explored a little the first two days, but entered the final round with a dedicated plan.

“Each day, my bite really started (late morning),” Mah said. “The key in the final round was I went into my main area and I waited on them.”

Mah had been sharing the area with Joe Uribe Jr. of Surprise, Ariz., who placed fourth. Around 10:30, Uribe decided to relocate and Mah found himself breathing a sigh of relief.

“I knew the winning fish were in this area, so when Joe left, that allowed me to fish more freely and let stuff rest,” Mah said. “I could leave a good stretch and not worry about another great fisherman fishing it. I could come back later after letting a spot rest.”

“I had been using a 1 1/4-ounce tungsten weight, but I went up to a 1 1/2- and a 1 3/4-ounce weight even though the cover didn’t require it,” Mah said. “I threw (the heavier weights) because the fish were not actively eating, but they would react to that big weigh going by them.”

Mah opened his day by catching a fish of nearly 5 pounds on a black River2Sea Ish Monroe Phat Mat Daddy frog around 6:30 a.m. This relief helped balance his nerves for a couple of forthcoming heartbreaks.

“It’s been so tough and to catch a fish of that quality early, I felt like I was ahead of where I was the first two days,” Mah said. “Usually when you don’t fish clean against this level of competition, you don’t win; today was just my day.

“I lost one that was pushing 5-pounds on camera, then I lost another one that was about 4 and I didn’t even have (my 5-fish limit) yet. But then things started happening.”

Austin Wilson of Citrus Heights, Calif. finished second with 17.5 pounds. Having won the inaugural APEX Cup on Lake Almanor in April, Wilson qualified for the final round with a two-day total of 20.02 in the Total Weight standings.

“All three days, I started in the north end because the 5-mph zone kept the water calmer,” Wilson said. “On days 1 and 2, I left and ran south, but today, I stumbled across something. I found fish on an old road bed with a mix of rocks and grass. The water was stained and we had a little wind.”

Wilson caught his fish on a 3/8-ounce green pumpkin ZMan ChatterBait JackHammer with a fluke style trailer, a Spro Bronzeye popping Frog, a Spro Bronzeye walking frog and a punch rig. For the latter, he used a Missile Baits D-Bomb with a 1-ounce Wicked Weights tungsten weight.

Greg Gutierrez of Red Bluff, Calif. finished third with 9.54 pounds. After leading Day 1 with the event’s heaviest bag — 18.08 —, Gutierrez decided to save his best fish for the final round and fished another area that yielded two keepers for 5.26 and moved him back to second.

Leaning on his main area for the final round, Gutierrez caught his fish on on a 3/16-ounce Frenzy Nail with a 6.95-inch Reaction Innovations Flirt Worm in green pumpkin magic and a dropshot with a 6-inch Roboworm in the margarita mutilator and ox blood colors. He used a 3/16-ounce Woo Tungsten dropshot weight around riprap and a 3/8-ounce in grass.

“I came up here before the off-limits just to figure out what was what,” Gutierrez said. “There’s riprap all the way around (the Afterbay) and my Torch Eyewear sunglasses are amazing, I could actually see the break in 8 feet. You could see where it turned to grass and where certain places had scoops in the riprap.

“I would cast up on the bank and if I could get the dropshot or the Nail through the rocks, it would drop into that little gully. That’s where I ended up finding my big bag on Day 1.”

Travis Huckaby of Modesto, Calif. won the Yamamoto Toad of the Tournament standings with a 6.23-pounder.