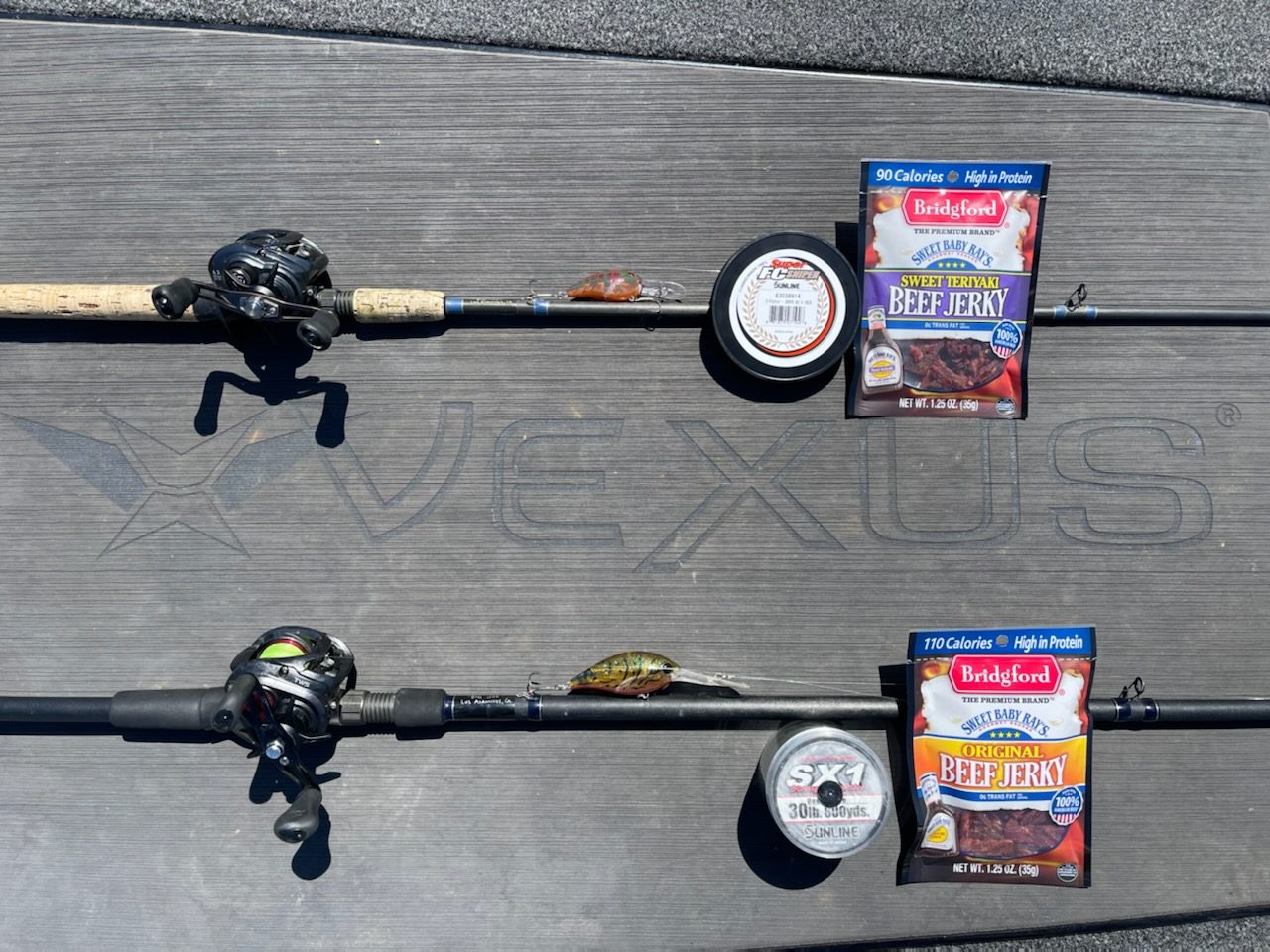 1. Tournament winner Nick Salvucci targeted prespawners on a flat with rock and wood. He caught his fish on 6- and 7-inch Keitech Swing Impact Fat swimbaits and a red SPRO Rock Crawler 55 crankbait.

Difference Maker: Positioning was critical, so Salvucci relied on his Minn Kota Ultrex trolling motor’s Spot Lock function. He also used his Garmin LiveScope to spot fish on each individual structure he fished.

2. Making his second top 10 in a row, Nick Cloutier caught his fish on a River2Sea TacticalBassin DD crankbait, a 1/4-ounce ball head with a 3.3 Keitech Swing Impact Fat in electric shad and a Yamamoto Hula Grub on 1/2-ounce Football Head.

Difference Maker: While his Garmin Panoptix helped him pinpoint particular rock piles, Cloutier found his Phenix rod’s parabolic bend helped with the crankbait bite. Light and soft, when a fish bit, the rod did all the work.

Difference Maker: While the majority of his bites were fully committed, Michels added a No. 4 Mustad trailer harness to his swimbait. Most of his fish were choking the bait, but the harness often snared the ones that tried short striking.

4. Bill O’Shinn fished a range of depths and caught all of the fish he weighed on a Rapala DT10 and DT 14, both in dark brown crawdad. The DT 10 produced the most bites.

Difference Maker: O’Shinn threw his baits on iRod 763 Air and 764 Air with 10-pound Seaguar Tatsu fluorocarbon. Working an 80-yard stretch, he took his time and dissected every stump and brush top.

5. Placing fifth, Joe Uribe Jr. did most of his work with his custom Uribe Magic swimbait, but he also caught keepers on a SPRO Rock Crawler in red river craw and an Evergreen CR-16 deep running crankbait in olive craw.

6. John Stewart spent much of his time cranking with a 6th Sense Cloud 9 C-10 in a shad pattern and a SPRO Rock Crawler 55 in a craw pattern. He also caught fish on a 4.8 Keithech Swing Impact fat in electric shad on a 3/8-ounce swimbait head.

Difference Maker: Phenix X12 and X13 rods afforded Stewart the sensitivity to feel his crankbait bounding off rocks. Fish were short striking and this perception made it easier to detect bites, while 10-pound Sunline FC Sniper fluorocarbon easily handled his big fish.

7. Colby Pearson caught a few of his fish on a Duo Realis Spinbait 90, but did most of his work with a 4-inch Megabass Hazedong in ghost color on 1/8-, 3/16 and 1/4-ounce Keitech ball heads.

Difference Maker: Familiar with the lake, Pearson set out to catch a few largemouth each morning and then hunt big smallmouth. His Garmin LiveScope equipped him to study contours and make pinpoint casts on creek channels.

8. Making his second top 10 in a row, Randy Mcabee relied on a single bait — the Osprey R-Mac top hook swimbait (his design) in a kokanee color. He threw his swimbait on an 8-foot Stealth Stix 4 Fathoms rod and 17-pound P-line fluorocarbon.

9. Making his second top 10 in a row, Scott Hellesen said he caught 90 percent of his fish on a 3.3 Keitech Swing Impact Fat in sexy shad on a 1/4-ounce Gamakatsu ball head jig. He also caught fish on a wacky-rigged 5-inch Yamamoto Senko in the natural shad color.

10. Stan Lafever caught his fish on a dropshot with a Damiki Armor Shad in shad and white colors with a 3/8-ounce homemade cylinder weight.